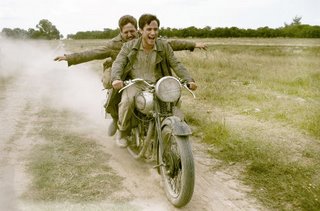 Supposedly, yerba mate', a South American medicinal and cultural drink of ancient origins is really really good for you. Introduced to the world by the Guarani Indians of South America. And it supposedly is the secret to why Che Guevera was so darn energetic (there's even a cameo/product placement in The Motorcycle Diaries of the friends constantly sipping their mate')--and the act of merely drinking is also a traditional, communal activity, what more could you want?

Mate' first came to my attention because some people on the Chronic Fatigue Syndrome boards I am on were talking about it giving you a "clean" burst of energy without the icky letdown common to coffee and tea. I actually LIKE the kick from coffee, but found that mate' did give me some nice sustained energy, especially in the afternoon when I tend to get draggy in the office. (Plus, caffeine not only hsa not been proven to be bad for fertility, but it had been shown to make sperm swim faster. Hyah!

The smokey taste is also not going to make it a new flavor at Starbucks soon, although it taste about 1000000 times better than this Chinese tea I am brewing/drinking/gagging on (more on that later).

Here's an article from the New York Times on how mate' is the new hot thing athletes use to boost their endurance.

Another from USA Today, on all the great antioxidants and other health benefits.

Guayaki is a company that offers organic, shade grown, fair trade products, and they blend them with things like chocolate to make the taste more palatable. There's also this ready-made drink (although it has sugar), which has a nice taste and you can find their stuff in most good health food stores or their website.

For more traditional types, try loose mate' at
Yerba Mate' Cafe, a great mail order place for organic mate' plus all the doodads that makes making it/drinking it the traditional way (with the cool straw thing, called a bombilla, easier.

Another consideration is that, just like with shade-grown coffee, buying yerba mate' encourages reforestation, as you will make it more worth the farmer's while to repopulate the land with this indigenous plant that grows under the rainforest's verdant canopy. Salud!