Why not camel milk? 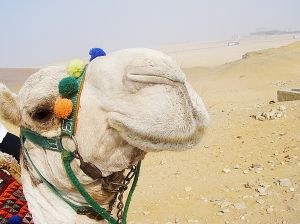 After that admiring review of the nutritional value of donkey milk, camels from all over the world have been emailing me to extoll the virtues of their milk.

This just in from Hippy Shopper

With a similar taste to cow's milk (though without its propensity to curdle) and three times the vitamin C, Mauritanian camel milk is a new hot product on the global market. It can even be made into cheese with a similar taste to goat Camembert (but don't look for that on the market since red tape is threatening to choke the product's export chances before they even get started). In a country where 2/3 of the population live on £1 per day, fair trade camel dairy products could make a huge difference: the potential market is tagged at a cool £10bn. Thanks to the dairy, Mauritania's nomads have been able to connect to the ever-globalizing world without being swallowed by it.

I hope the red tape thing can be cleared up, but you never know. At a farmer's market in Minneapolis, I stopped to admire some bison jerky...but gagged when I saw the label and how full of nitrites, msg, etc., the stuff was. When I asked the farmer-guy if he was ever going to have some jerky w/o chemicals, he said he actually was in the process of doing it, BUT there was a LOT more onerous bureaucracy (including having inspectors actually WATCH him making jerky, which, if he makes it the way I make it, it's literally like watching meat dry) if you want to try to keep the meat in its natural state, like the Indians and early pioneers did forever. I don't know why the government puts so much faith in chemicals: tons of nitrites and MSG, ergo okay to eat.

Doesn't that seem kind of backwards?

Any USDA inspectors out there?
Posted by GreenFertility at 5:07 PM

I live in Georgia and have been raising camels for over 12 years now. I am thinking about starting up a small camel dairy. The camels can priduce 25 - 35 litres of milk each day and right now I have 5 producing females. So that could potentially be 175 litres each day! I wonder if I could get some backers to help me with the start up of building a milking facility? hmmmm, my email is donnascarousel@bellsouth.net

have you tried the milk? If you want to write about it in a guest post...be my guest!!