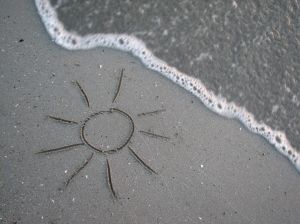 I know this headline sounds like something from The Onion, but it's not. Here's an article on how a new study from the University of California confirms earlier suspicions that sunscreen may actually promote skin cancer: "Originally published August 30 2006

A team of researchers from the University of California has found that sunscreen can do more harm than good once it soaks into the skin, where it actually promotes the harmful compounds it is meant to protect against.

The research team found that three commonly used ultraviolet (UV) filters -- octylmethoxycinnamate, benzophenone 3 and octocrylene -- eventually soak into the deeper layers of the skin after their application, leaving the top skin layers vulnerable to sun damage. UV rays absorbed by the skin can generate harmful compounds called reactive oxygen species (ROS), which can cause skin cancer and premature aging. The researchers found that once the filters in sunscreen soak into the lower layers of skin, the filters react with UV light to create more damaging ROS.

The Cal team's research is the first to indicate that sunscreen filters -- intended to protect the skin from the very UV damage they apparently promote -- have reacted in such a way.

The researchers found that the filters only become damaging when they are soaked into the skin and another layer of sunscreen is not applied.

'This research confirms what the natural health community has been saying for years: That sunscreens are harmful to your health,' said Mike Adams, a consumer health advocate. "The best sunscreen is actually achieved with a diet high in antioxidants," he explained. "When you eat berries, superfoods and fresh produce on a regular basis, these natural antioxidants are utilized by your skin to protect you from excessive ultraviolet ray exposure. Sunburns are caused more by poor nutrition than by UV ray exposure."

[remember when I said despite sunscreen-less frolicks in the bright-bright beachy sun, we actually didn't get burned this year, hm?]

And I KNOW the ozone layer is thinner (damn flourocarbons!) but consider: maybe sunscreen ain't the answer to warding off skin cancer, just like those pesticidey nets ain't the answer to malaria. At least, instead of worrying about the expiry dates and the possibility of the tubes opening and the subsequent leakage of your sunscreeny products, the FertilityBitch says, why don't you just chuck 'em? Ahhhh, don't you feel better now?

p.s. speaking of burning, aren't you curious what the Burning Man thingie is? I still kind of don't get it. Treehugger thus spake: "From an ecological point of view, Burning Man is a knot of contradictions, melding earth consciousness, self-sustainability, and social harmony with flames, debauchery, and disposable resources." Hm, kinda sounds like this blog, the debauchery and flames and social harmony part, at least.

My (excellent) novelist friend Leonard Chang was there and wrote a very descriptive dispatch of what it's like to be at Burning Man.