Before you write out that big check to the Republican National Committee... 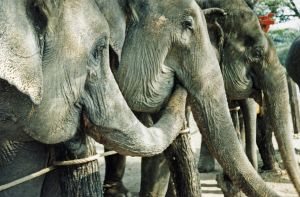 Democratic National Committee Chairman Howard Dean sent a letter to Republican National Committee Chairman Ken Mehlman...after a Michigan newspaper revealed that an RNC-funded organizer in Michigan is coordinating "Catch an Illegal Immigrant" and "Fun With Guns" events at the University of Michigan, similar to Republican events in other states like Pennsylvania and Texas.

In the first event participants would win prizes for catching others posing as illegal immigrants and in the latter, "young Republicans would shoot cardboard cut-outs of Democratic leaders such as Sen. Hillary Clinton (D-N.Y.) and Sen. John Kerry (D-Mass.)." The report of these RNC-funded activities also comes just two days after the Washington Post reported that "in a pivotal year, [the] GOP plans to get personal." [The Michigan Daily, 9/12/06; Washington Post, 9/10/2006]...

...Dean further challenged Mehlman to help "elevate the political discourse in America, and...act to have these desperate, inappropriate attacks stopped"

Apparently they were planning to run one at the University of Texas but the Latino students got a wee bit upset.

This post has nothing to do with fertility, except that it's seriously un-fertile behavior and again, I wonder, where is the media, liberal or otherwise? I'm so sick of the Republicans always being, "We're the values party." I think they're just mean! Hello, media? Hello?

I posted about this as well...unbelieveable...oh wait, no its not...its the Republicans at work.

Hi, Marie, thanks for posting this.

We've allowed our country to become heartless, I hate to say. There are individuals struggling hard against the tide, but I sometimes wonder if it's too late. Sad, sad, sad indeed.

Thanks Third Mom...unfortunately, the more I think about it, the more depressed I get. I guess the hopeful thing is all our little blogs sometietmsm get beyond the info-ganda and has everyone else asleep, I guess. I'm still shocked I haven't seen ANY of this in the news!